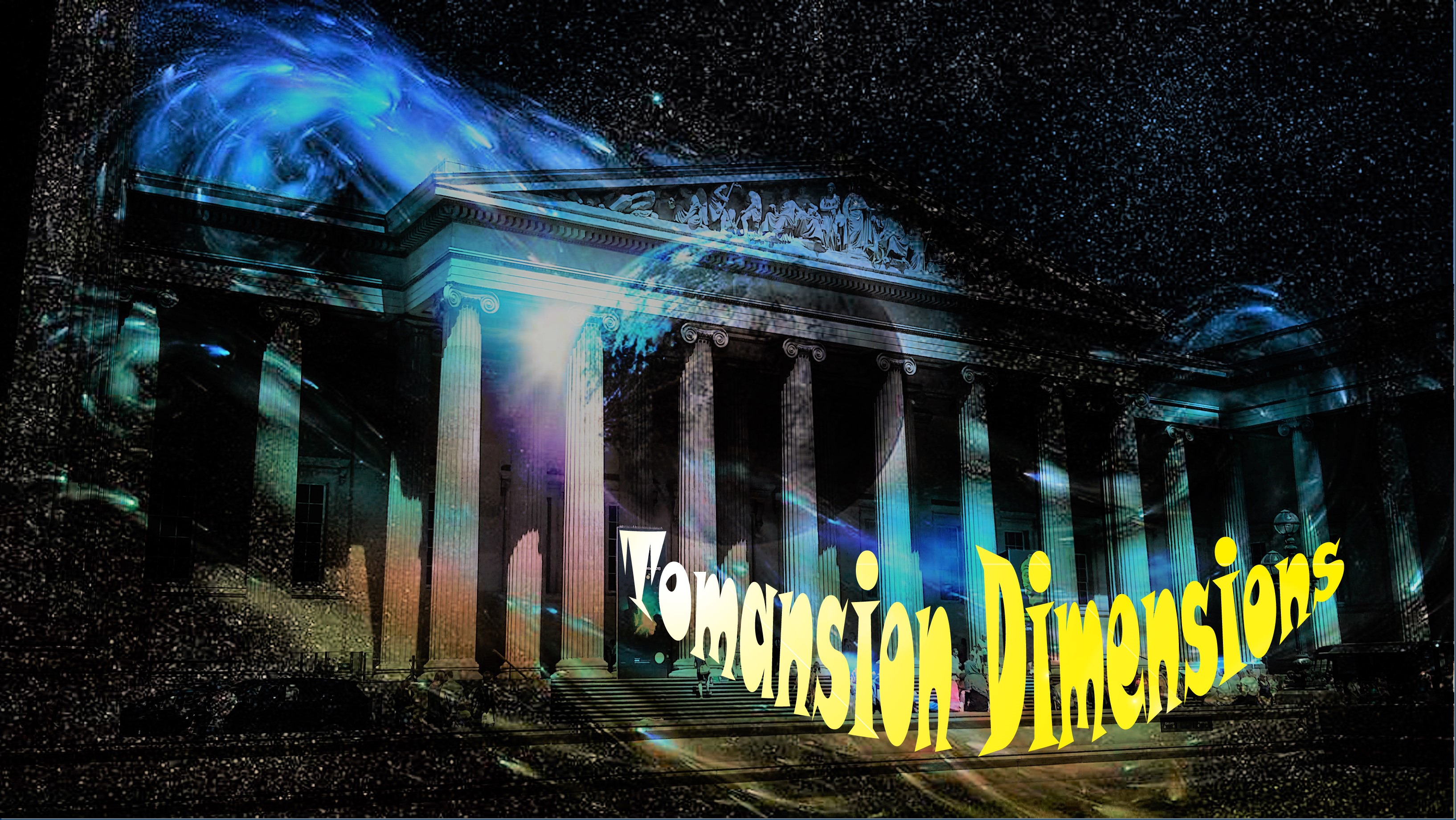 Tomansion Dimensions Part 2,  inspired by and dedicated to my wonderfully imaginative friend, Tom – You can visit Tom’s blog at The Mansionic Perspective and share in the wonders of his blog world, where you can also enjoy his perspective of the trip through The Galactic Vortex – following on from Shifty Mansionic Dimensions on this blog. You can learn all about gargoyles in his post The Winged Lion and the Gargoyle, and enjoy a further fantastic post about Winged Wolves so do check this one out as well – it’s awesome! The Wild Winged Wolves of the Wilderness

“TomAstreaus! This is the Temple of Sopdet – Egyptian goddess of the sky and stars, she personifies Sirius the Dog Star – the Star of the Celestial Wolf. Can you see it? Over there above the Great Pyramid! This is wonderful news – the arrival of Sirius in the sky heralds the approach of New Year and we celebrate with a festival – ‘The Coming of Sopdet.’ See? Those are her symbols, stars and dogs. And there is her statue– isn’t she wonderful?” Adopting a suitably god-like expression of awe and respect Tom studied the portrayal of the goddess Sopdet whilst wondering what a statue of himself might look like. Sopdet in the lofty pointy white coronet of Upper Egypt crowned by a star was very much the Egyptian goddess. The presence of the statue of a Greek god such as himself, possibly minus the hairy legs if Lady TometteNut’s beseeching worked, could surely only serve to enhance her reverent position in the temple! 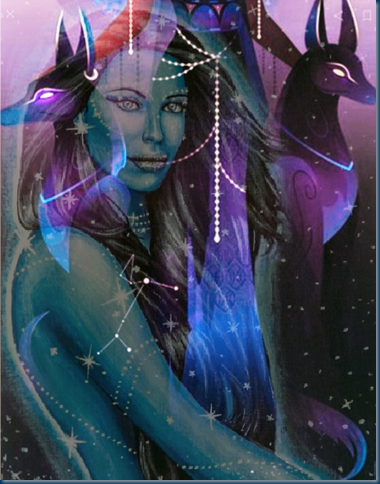 “You know of her TomAstreaus! In Greece she is known as the Greek goddess Sothis and Sirius as Seirios. – the celestial dog in the constellation of Canis Major – the Great Dog and the Guard dog of Orion!”

Prompted by such imagery Tom’s inner poet piped up with a section of Tennyson’s poem, The Princess – “…the fiery Sirius alters hue. And bickers into red and emerald.”

“Sopdet is a Source of great knowledge and power guiding both the heavens and human destiny. TomAstreaus, she is the perfect goddess to beseech to change your destiny! She will surely take pity on you! If not, we will return and give her a little whack!!”

“Yes, the statues residing within our temple walls are known as temple gods – they are tasked with listening diligently to our beseechings. We bring our requests to the appropriate temple god and they relay our beseechings to the god most suited to dealing with the beseeching. Of course they may decide not to grant the request so on the next visitation to the temple of the gods it maybe that we decide to whack the temple statue with a reed!”

ThomasinAsteria snorted loudly and struggled unsuccessfully to stifle an explosive, irreverent giggling fit. Fingers handed her a convenient to tissue to dry the tears streaming unashamedly down her godly features but that only served to accentuate her irreverent giggles still further. Fingers took matters into his own hand and clamped it firmly over ThomasinAsteria’s mouth succeeding at least partially in stifling her helpless giggles.

“It’s just a little whack – every now and again it is good to demonstrate to the gods how much they have disappointed us! – ThomasinAsteria please control yourself! Surely yourself and TomAstraeus have given your Greek temple gods a small whacking from time to time!“

Tumbling out of the chariot and into the marketplace, they found it to be teeming with Egyptians purchasing everything from medicinal products to amulets, fine perfumes, and jewellery, fruit and vegetables, exotic clothing…. Fingers and Tombie ran off, inexplicably, to investigate the grave goods stand whilst Tommy, the inner werewolf headed eagerly for the dead animals stand. Fingers the easily distracted Inner typist sped off to the papyrus and ink stand accidently taking Tombie’s arm along…ThomasinAsteria and Lady TometteNut were quickly engaged in the rugs and furniture stands, shrieking in wild abandon, over their shoulders – “Such beautiful and refined Egyptian items will look wonderfully becoming, adorning the Mansion-Villa, TomAstraeus!” Temporarily abandoned by his goddesses TomAstreaus was left to investigate the tools stand, the metal and leather goods stands and the salt stand…which was conveniently close to the live animals stand…

“Oh look! The evil wolf gargoyle door knocker – over there – shopping at the spell stand! Maybe it can persuade the Tommy knockers to go back to work…”

“No! Quickly ThomasinAsteria…. Hide before it sees us! Head for the Great pyramid by the river Nile!”

“But the spell to change your destiny TomAstraeus! They are written on very fine papyrus and once they have added your name to the spell, we can chant over it!”

“Never mind the spell Lady TometteNut, your beseeching of the goddess Sopdet was more than enough – Now to the chariot! Fingers is waiting and Tombie can get the spell later!”

Holding tight to Tommy, the werewolf, with one hand and Tombie who was hanging off the chariot in a cloud of sand and flying limbs with the other, Tom let off a string of godly expletives and sent out a beseeching of his own to the goddess Sopdet along the lines of could he perhaps survive this wild chariot ride hotly pursued by glowing volcanic pyramid rocks? Fingers was taking his job very seriously and the chariot steeds were careering towards the Great Pyramid with all the finesse of those being hunted by dark creatures from the pits of hell. Glancing at the Seba-symbolled pyramid artefacts scrambling to catch up with them Tom couldn’t help feeling there might be some justification for that.

“Oh gods! TomAstreaus – Quickly – you must put on some make-up!”

“Make-up Lady TometteNut? What are you talking about?! I am a god!!”

“Eye make-up TomAstreaus – it is completely normal in Egypt for men and gods to wear make-up -eyes with-out make up are defenceless against the ‘Evil Eye!’ ”

“There is no time to explain now – Here, put on the eye make-up! Your inner creator and inner make-up artist will guide you in the noble steps involved!”

“It is said” the Tomipedia boomed through the clouds of sand and hieroglyphics “that the Great Pyramid of Giza was built specifically to align with the stars in particular with Sirius, Seirios to you TomAstreaus – the Wolf or the Dog Star.”

“This is the Great Pyramid of Giza?! Oh gods!”

“Yes. And the ancestral home of those fiery volcanic pyramid rocks ThomasinAsteria – the ones about to join you in the Chariot of Fire –“

“Oh gods! Lady TometteNut, help me to catch them! That’s right – hurl them back out as fast as you can!”

Returning its attentions to TomAstreaus who was standing god-like and all-powerful, or so he hoped, to the rear of the bucking Chariot, the Tomipedia turned up its volume and yelled determinedly over the screams of the women and thunder of hooves,

“When you have finished worshipping the Dog Star TomAstreaus…. “ It’s boom was laced with sarcasm but Tom chose to ignore that in a masterful display of godly disdain, “The constellation of Canis major (The Great Dog) not only accommodates the brightest star in the sky – Sirius (The Dog/Wolf Star) but also the Canis Major Dwarf Galaxy. We know TomAstreaus of no other galaxy bearing such a close proximity to the Milky Way. Hence the wolf star is also known as the ‘Watchman of the Heavens at the bridge of the Milky Way’”

“And the Seba symbol? What else do you know about that?”

“The Seba? Oh that!” Feigning nonchalance the Tomipedia waited casually for Tom to dislodge the Seba-marked volcanic pyramid styled hitch-hiker clinging onto his leg, and toss it back off the chariot.

“Oh TomAstreaus! You are so masterful today!” ThomasinAsteria gushed delightedly over the rising wind and the thundering chariot.

“The Seba,” the Tomipedia paused for dramatic effect, as the chariot swept through the entranceway and into the heart of the Great Pyramid,” is the symbol of the stars – associated with gateways and doors and time….”

“I think we already know that… anything else – that we don’t know?

“It is also connected with the concepts of leadership, self-control, travel, studying, and fresh starts,” the Tomipedia snapped huffily, before adding pointedly, “and it is associated with the Sopdet – Egyptian goddess of the Sky and Stars!”

“And the Great Pyramid?”

“- Is a vortex-portal into the Canis major Dwarf Galaxy!” 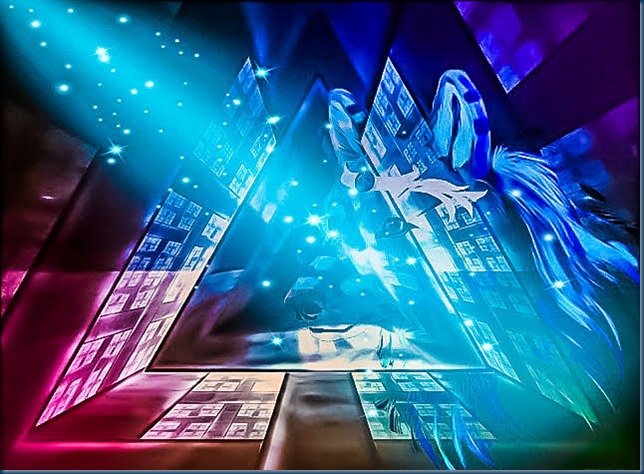 “Look TomAstreaus! Over there – amongst the hieroglyphics on the pyramid wall – You have invoked the god of the dog star – Seirios! We must direct our beseechings towards him!”

Tom gave his hairy legs a brief glance simultaneously admiring his physique adorned in his godly Tomga. This didn’t seem an entirely appropriate subject for beseechings at this point. Fingers was driving the chariot of fire like a hand possessed and Tom’s inner werewolf was on the loose again. Tombie lurched after it, but his leg fell off, and the Inner Leader of the Opposition was shouting about the rights of the volcanic pyramid artefacts – currently being hurled out of the chariot and into its complementary flames.

“Your destiny lies ahead of you TomAstraeus, god of the Dusk, the Stars, and the Planets, and of the art of Astronomy and Astrology!” Seirios howled above the noise and chaos.

Yes, I can see that!” Tom yelled as they hurtled ever closer to the swirling eye of the vortex spiralling towards them, accompanied, inexplicably, by the tentacles from the “giant multi-faceted nebula vortex in the (mansion’s) bathroom” that had last been spied stretching down the stairs, which were on the last viewing an Egyptian ramp.

“It is written in ‘The Calendar of lucky and unlucky days’

“This does not strike me as a lucky day Lady TometteNut! “

“We really need that spell!

“We do ThomasinAsteria? Don’t you think it’s a bit late for that now?”

“Look on the bright side TomAstreaus!”

“Seirios -what does ‘The calendar of lucky and unlucky days’ say?”

“That is for you to deduce TomAstreaus – You are the Titan, who fought against Zeus and the Olympian gods!”

An almighty roar shook the Great Pyramid, and for a moment it seemed like the whole of the Canis Major Dwarf Galaxy and the Milky Way, combined into the heart of the vortex. Space and time melted into impossible dimensions, hurling the Chariot of Fire, its gods and goddesses, and all accompanying participants, on a mind-bending trip of carnival lights and shapes, and dancing hieroglyphics. Somewhere up ahead of them, a tiny wolf gargoyle doorknocker held up a sheet of papyrus covered in hieroglyphics–

“It’s all in Egyptian!” ThomasinAsteria screamed, spinning past TomAstraeus, caught in a cosmic whirlwind.

“It says…. ‘To Tom’s!’ “Lady TometteNut yelled as she floated, waving to them.

“No TomAstreaus …It also says, ‘Straight ahead to Greece!’ And just below that… ‘To the Canis major Dwarf Galaxy!’” 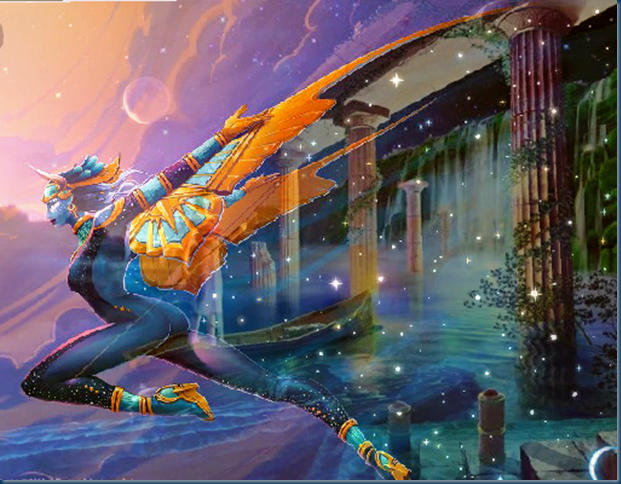 “But they’re all pointing in the same direction!!!”

Ice wolves of Europa. Intergalactic star wolves running with the moon and the stars in the light of another world. Callers of the moon wolves-song and interstellar hunters across the icy surface of the Europan seas. Echoing the call of an alien world and the whispering of the moonshadows, the call of the star songs, and the dream of worlds beyond the stars and cities in the sky.